A day with so much promise certainly ended on a sour note. But before I get ahead of myself I'll say that we had a nice night's sleep in our teepee at the Wigwam Village #2 in Cave City, Kentucky. It is one of only three remaining wigwam villages of the seven designed by Frank Redford. The other two are on Route 66 in Holbrook, Arizona and Rialto/San Bernardino, California. We have yet to stay in the Holbrook village but hope to do so this time. We'll see how it works out though.

The plan was to drive the western leg of the Dixie Highway from Cave City to a point near Chicago today. It was a beautiful day early on, and the drive was very nice. Driving old two lane highways is a wonderful experience. Even through Indianapolis, where I saw the city in a whole new light. A very nice place! As we started getting north of Indy though, that's where the trouble started.

We had noticed the temperature gauge getting hotter in stop-and-go traffic. We didn't run into that too much though so we kept an eye on things but didn't worry about it. After eating lunch in Crawfordsville we got back on the road and realized that the water temperature was almost up to 250 degrees and wasn't coming back down. We were in the middle of nowhere and I was hoping to make it to the next town but eventually pulled over to avoid damaging the engine. We sat for 45 minutes, and after finding out that the next town was 2 miles away we decided to chance it.

There was no mechanic in town but there was a body shop there. The owner generously allowed us to bring the car into his shop out of the rain that was now falling, and his son and I looked into the cooling problem. We tried a couple of things, and in the end made some temporary repairs to the radiator. Sharon and I held out breath and  carefully watched the temperature gauge while we drove the 120 miles without incident to our hotel.

Just about the time I was feeling a bit better about things I realized that the trunk wouldn't latch after taking our things out. I messed around with the latch out in the now-freezing rain for about 15-20 minutes before deciding I couldn't get it to work. So I borrowed some twine...

So tomorrow morning at 5am Sharon and I will go out to the car and remove everything from the trunk and rearrange everything on the inside of the car to make it all fit. I will then use the twine to hold the trunk down, and we will head to Chicago in order to arrive at our Route 66 starting point by 6am. Then we'll take off and see how things go. Along the way I hope to find a body shop that can fix the latch. I'm guessing it's a 5-minute job, but I'm too dumb to figure it out. I'm also hoping the radiator will hold up, but we'll see. Keeping the engine cool in 60 degree weather is one thing; doing so in the 110 degree southwest desert is something else entirely.

Sorry, but there were no pictures today. The car problems and freezing rain precluded that. We'll try to do better tomorrow.

Our latest-greatest trip began today. After lots of planning and preparation, much more than usual, we began our cross country jaunt this afternoon. This time Sharon and I decided to be adventurous and take the 1937 Ford on our trek. With a relatively modern drivetrain and suspension, along with creature comforts like air conditioning and power windows, it should be comfortable and reliable, not to mention a blast to drive. And so far, so good. We managed 365 trouble-free miles today as we drove from Brevard through the Cumberland Gap to Cave City, Kentucky. We're now in our wigwam, getting ready for a good night's sleep before our trip to Chicago in the morning.
So here are a few pictures before the trip begins in earnest tomorrow. 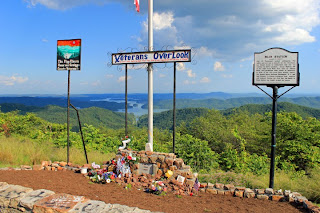 On top of Clinch Mountain, overlooking Douglas Lake in the background. 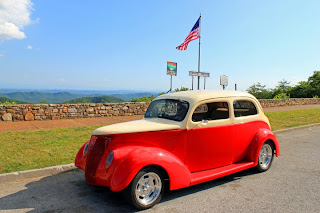 The famous 1937 Ford on Clinch Mountain. 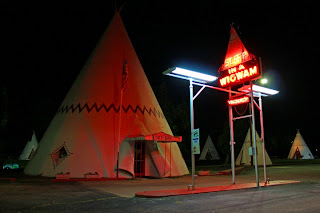 Sleep in a wigwam! 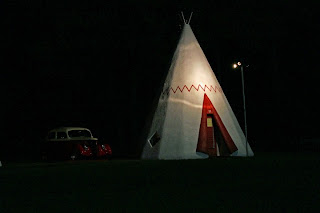